Lyle is one of the truly amazing people in the Downtown Eastside.  An unsung hero, he is a genius in film having made countless films of the community using it's own local people for actors  He was there long before reality tv in the early years of Vancouver Film.

He is commonly found at the Dug Out where he likes the coffee and company. His friends who visit there include law professors, doctors, craftsman, artists, sculpturers, chefs and just plain ordinary folk.  He's popular with the gentle women. He has daughters of his own and loves to show pictures of his grandkids.

He had a stroke some time back. Lesser men would have died.  More would have given up. Lyle just kept on, taking each day as it came,  eventually learning to walk again and even getting some speech back.  At first opportunity, he had a digital camera and eventually was fitted up with a lap top computer.  After that he was back to his favourite corner of the world.  He celebrates the the healthy culture and people of the downtown east side. He shows the world the flowers that grown amidst the garbage.   Alot of outsiders like to tourist down here.  Lyle is an insider..

Most people would think that the men that frequent the Dug Out are down and out.   Some were. There's an AA meeting every day at 12 30 and folks come there to share what it was like when they drank and did drugs in the Down Town Eastside.  Now they're clean and sober and passing on what they have to those who want to change.

A first nations woman came regularly to the Dug Out in her wheelchair till one day she didn't leave the hospital. There are pictures of people like her on the wall. Alot of first nations folk come to the dug out when they're tired of the bars.  There's coffee and often there's free bread.  Different charitable groups will come by and serve food for those who line up.  It's a rough life for those living on the streets.  The Dug Out is a safe haven..

Drug and alcohol workers and  ministers stop  there too.  The Salvation Army detox is around the corner and folk that help in such places working sometimes after they came at first for help just come by for coffee.  Local artists like Jay just drop by for a break..  Others watch the games on the wide screen tv.

All of us who work in the area when we do stop by the Dug Out often see Lyle. He always smiles and waves even though the stroke makes his smile more an effort than for most.  I find his smile a pillar of spirituality.  I like getting his thumbs up too. 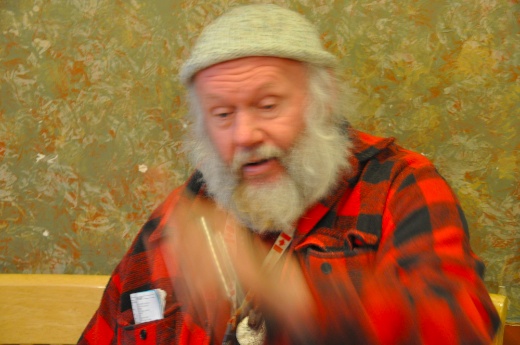 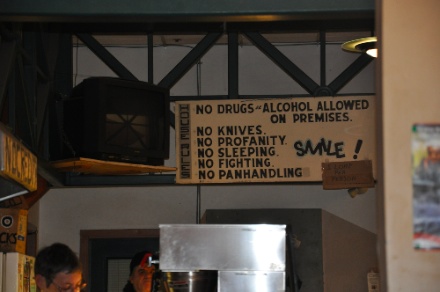